Last year he was jailed for his role in a scam that cost a terminally ill widow her life savings. Today, Sean White is back working in property, as a lettings agent.


White (right)  was given a two-year sentence (one year jail, one year on licence) after pleading guilty to money laundering. Released on licence he is now working for an "ethical" estate agent in Cardiff. You could not, as they say, make it up.
White laundered £115,000 of our late mother's savings and was told by Judge Paul Thomas QC. "You were a vital component in this wicked enterprise" and that he would "never again be employed in a position of trust - and deservedly so".
The judge spoke too soon. Barely 18 months on, White is now letting properties for Property Megastore - "We are a family run, ethically motivated Estate & Lettings Agency".

Company boss and self-styled "property visionary" Andrew Gregory said he empathised with our family's situation and explained himself courteously when I contacted him. He told me: "I won't apologise for taking him on. Any decision I make here is for the good of the business. I did not do this lightly. I believe in giving people a second chance."

I can understand his point of view and I do think it is preferable that White earns his own living honestly rather than live off the benefits funded from our taxes.

But it is impossible to overstate the impact the scam had on the last year of our mother's life, destroying her peace of mind as thoroughly as cancer wrecked her body.

White, who admitted visiting our late mother's home - presumably not a social call - was the first person jailed over the scam. Last month, Steven George of Dutton Walk, Bristol was given an eight-month sentence for possession of the proceeds of crime. His arrest and jailing followed more than a year of painstaking detective work by Barry CID who initially had only his name on a banker's draft to go on.

Back to the Property Megastore. Andrew Gregory said he spoke to probation officers, lawyers, and some of his clients before appointing someone with a criminal record for dishonesty to his staff.

"He has repaid his debt to society". That may be true, although he has not repaid a penny of the £2,000 he admitted making from the scam, let alone the £115,000 of my mother's savings that were in his account. Significantly, he showed no remorse either in police interviews or in court.

Mr Gregory is very happy with his new member of staff - "he has been nothing but exemplary". Except, he managed to advertise on a Cardiff housing website (screen grab below), wrongly claiming to be an accredited landlord - a process that has now led to a review of the way landlords in the city are verified. 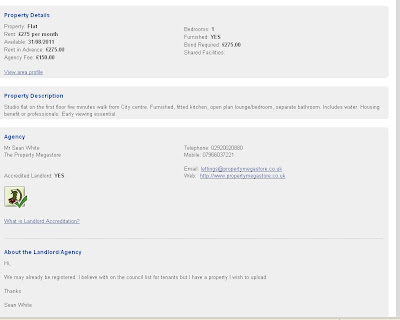 The Property Megastore believes this was down to a slip-up by someone at the council, filling out the forms over the phone, rather than a deep conspiracy. The company says it was actually nothing to do with or anything implied by White or the Property Megastore.


This is the council statement, issued in the name of Councillor Judith Woodman, Executive Member for Housing, Communities and Social Justice: "Cardiff Council can confirm that Mr Sean White is not an accredited landlord.

"Information recently published on the Cardiff housing website http://www.cardiffhousing.co.uk/ which suggested Mr White was an accredited landlord was incorrect and withdrawn within a day of it being posted.

"Cardiff Council's current policy stipulates that prior to any information being published on the site; checks are made by our Private Sector Housing Team to ensure that there are no outstanding legal issues concerning the property. In the case of Mr White's property, these checks came back negative and an application to promote the landlord, agent and property was submitted by Mr White for inclusion on the website.

"As part of the application process, amongst other details, landlords are asked to specify if they are accredited. All applications are periodically checked by our housing teams to ensure that the information contained is accurate. There is also a facility on the Cardiff Housing website for landlords to amend/update their information. Enquiries are currently being made to establish exactly how Mr White's status came to indicate he was an accredited landlord.

"In light of this incident, Cardiff Council and it partner agencies are now reviewing current arrangements regarding the verification of landlord, agent and property information, including how this information in administered on the site to help ensure this doesn't happen again and to further enhance our existing safeguarding measures."
Posted by David Cornock at 15:19

This is a personal blog - any views expressed are not those of the BBC.